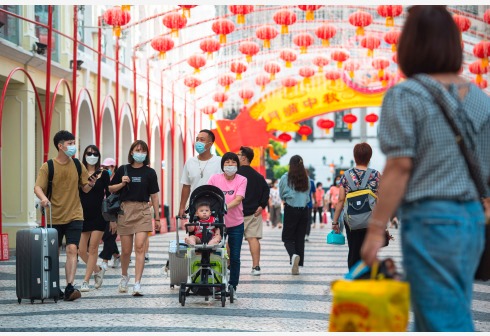 Local tourism industry insiders and SMEs have expressed their hopes for the daily average number of tourist arrivals to return to 40,000 and the sales figures to increase by 30 per cent to 40 per cent after the resumption of e-visas and package tours of the mainland.

The chairman of the Travel Industry Council of Macau, Andy Wu Keng Kuong said in an interview with TDM that after the resumption of package tours from the mainland, the number of tourists will gradually increase but may not be able to return to the pre-pandemic level.

The association chairman expressed that the industry expects the daily average visitor arrivals to recover to some 40,000 in November, equivalent to 60 per cent to 70 per cent of the pre-epidemic level.

Meanwhile, Ma Gin Chiu, vice president of the Federal General Commercial Association of Macau Small and Medium Enterprises, told TDM that the resumption of e-visas and package tours of the mainland is expected to increase sales figures in local enterprises by 30% to 40%.

In a press conference held last week, Chief Executive Ho Iat Seng announced that package tours from mainland China are set to return to the SAR in November, while electronic visas are set to be re-issued between late October and early November, in a move aimed at reviving the city’s tourism industry and economy.

The package tour arrangement will include visitors from Guangdong, Fujian, Jiangsu Zhejiang and Shangai, places with higher consumption ability, the Chief Executive noted, and the new measures are aimed at doubling the city’s daily visitor tally to 40,000 from the current 20,000 figure.