Macau has reported about 582 thousand visitor arrivals in October, accounting for a 29.6 per cent jump from the previous month, on the heels of the National Day Golden Week and the relaxation of visa restrictions for mainland citizens. However, official figures from the Statistics and Census Service still indicate an 81.9 per cent year-on-year decline.

Visitors from the nine Pearl River Delta cities in the Greater Bay Area represented nearly half (48 per cent) of the total tourist arrivals in October, of which 135,991 came from Zhuhai.

Overnight visitors surpassed same-day tourists, taking up 53 per cent of the total. 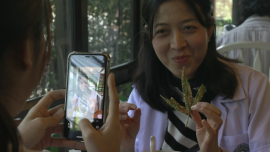 January 22, 2021
A month after cannabis was removed from Thailand's narcotics list, a Thai hospital restaurant has...

January 22, 2021
An earthquake with a magnitude of 4.9 struck Cyprus on Thursday, sending residents fleeing onto...

January 22, 2021
Google has suspended an artificial intelligence ethics researcher weeks after dismissing another member of the...